On this date in 2017, the Chiefs shocked the football world with their release of Jeremy Maclin. Despite a down 2016, Maclin still profiled as one of the most talented wide receivers in the NFL and was slated to enter the year as the Chiefs No. 1 wideout. 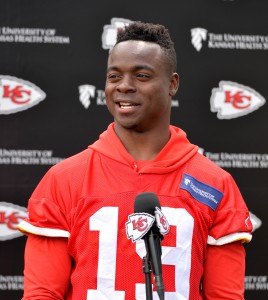 At the time of his release, Maclin was still only 29 and was not far removed from his 1,000-yard+ 2015 campaign. There was some logic in the move – cutting Maclin loose saved the Chiefs $10MM in cap space with just $2.4MM left in dead money, but the veteran surely would have preferred to be released in March, when there was more available money around the NFL.

Maclin never got the opportunity to justify his hefty five-year, $55MM deal in Kansas City, and he clearly wasn’t the same player when he moved on to the Ravens in 2017. Maclin finished out with just 40 catches for 440 yards for an average of eleven yards per grab – all career lows.

With Maclin out of the picture, the Chiefs were able to put a larger focus on rising sophomore Tyreek Hill. Hill was something of a gadget player as a rookie, but he truly broke out in 2017 with a 75/1,183/7 line.

Today, Hill’s football future is in limbo, but, from a football perspective, the decision to move on from Maclin proved to be a wise one. The Chiefs have boasted one of the league’s most potent aerial attacks for the last two seasons thanks in large part to Hill and a younger group of targets. Meanwhile, Maclin spent 2018 out of football before announcing his retirement earlier this year.