Gerald McCoy‘s agent is actively negotiating with the Panthers, Browns, and Ravens, according to Ian Rapoport of NFL.com (Twitter link). There’s no real timetable for McCoy to sign, though Rapoport notes that he would like to be on the field for the start of mandatory minicamp on Tuesday, wherever he lands. 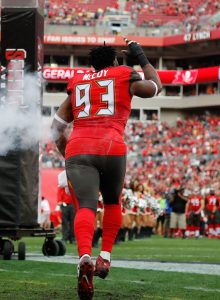 McCoy drew interest from seemingly 1/3rd of the NFL, but the Ravens and Browns seem to be in the lead for his services. The Panthers have also made a strong push to land McCoy in an effort to give Kawann Short a quality partner on the interior.

McCoy has 54.5 career sacks to his credit and has not missed more than three games in a season since 2011. He’d be an instant difference maker for any of those three clubs and each team would offer him a chance to win in 2019.

Ultimately, it may come down to money for McCoy and his camp – the veteran has reportedly garnered offers as high as $11MM/year, but it’s hard to see him reaching that mark after Ndamukong Suh signed for less than $10MM with the Bucs.