Could a running back with a career average of 4.8 yards per carry really be on the roster bubble? That’s the case with Ravens tailback Kenneth Dixon, who finds himself on a crowded depth chart at the position. 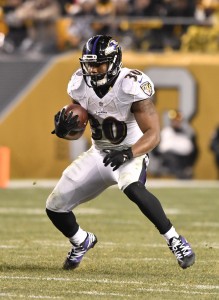 [RELATED: Ravens WR Marquise Brown May Not Be Ready For Training Camp]

In short bursts, Dixon has looked the part of a starter. Unfortunately, the 25-year-old hasn’t been able to find sustained success and he now finds himself behind free agent pickup Mark Ingram, Gus Edwards, and possibly fourth-round rookie Justice Hill.

If the Ravens carry only three running backs on the Week 1 roster, it seems unlikely that Dixon will make the cut. He has a shot at staying with the flock if they carry four, but team history suggests that they’ll roll with just a trio of RBs when the season begins.

A Dixon release would result in just $87K in dead money against $720K in cap savings.