Trade talks involving Texans pass rusher Jadeveon Clowney are rapidly heating up. The Texans have spoken with at least five teams about the former No. 1 overall pick so far: the Jets and Redskins are in communications with Houston brass, in addition to the previously reported talks with the Seahawks, Eagles, and Dolphins. 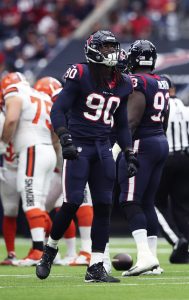 The Dolphins believe they are the favorites to land Clowney, and that makes sense given that GM Chris Grier and head coach Brian Flores have met with him in recent weeks. At the same time, Clowney is said to prefer the Seahawks and Eagles. Of course, Clowney is not a free agent, but he effectively holds the cards – he has yet to sign his franchise tender and is reportedly willing to miss regular season games until he gets his way.

The Redskins would also make some sense as an interested party, but they’re not in the mix for him at this time, per Wilson. They remain unwilling to trade Trent Williams, and that’s a big barrier when considering the Texans’ need for offensive line help.

The Clowney/Texans beef started sizzling again this week, sometime around when Clowney fired former agent Bus Cook. On that front, Wilson hears that Clowney is willing to represent himself, at least for now.