Antonio Brown won’t be facing criminal charges for two of the three sexual assault he’s being accused of, but he could still be in jeopardy with the NFL and the legal system. The latest accusation from Brown’s second accuser, if proven to be true, could easily take the Patriots star off of the field. 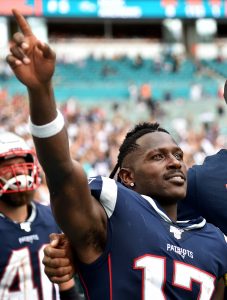 Brown’s accuser claims she received threatening text messages from the wide receiver on Wednesday, as Robert Klemko of The MMQB writes. In turn, her lawyer notified the NFL of the matter on Thursday night and included screenshots of the text in his letter to the league office.

Brown, she says, texted her and three other people to encourage the other parties to dig into the woman’s past. In response, the accuser’s lawyer petitioned the NFL to take action against Brown for “intimidating and threatening” her client in what she views as a “violation of the NFL Personal Conduct Policy.”

Jason La Canfora of CBS Sports says the NFL is meeting with the accuer’s lawyer’s today (Twitter link). As of this writing, Brown is slated to take the field for the Patriots on Sunday afternoon when they face the Jets, but that could change in a matter of hours. Mike Florio of Pro Football Talk says AB has been caught with a smoking gun and suggests that the NFL and the Patriots should take swift and severe action against him.

In his meeting with the media today, Pats HC Bill Belichick said the team was “looking into” the latest incident but would not offer further comment. When he was asked again about Brown, Belichick cut the press conference short by walking off the podium.