The Cowboys and La’el Collins have reached agreement on a brand new five-year extension, according to Charles Robinson of Yahoo Sports (on Twitter). The new deal will keep Collins under control through the 2024 season. 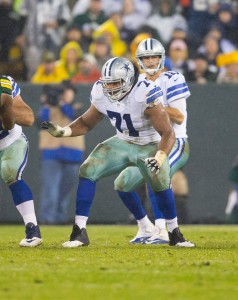 It’s a five-year, $50MM add-on that includes $35MM guaranteed, Adam Schefter of ESPN.com tweets. That gives Collins the highest guarantee of any right tackle in the NFL. Collins was set to make $8.5MM this year so it’s a six-year, $58.5MM deal in total.

The new deal has been a long time coming, with strong interest on both sides.

“I would love to stay in Dallas my entire career,” Collins said recently. “I love the Cowboys, I love Mr. (Jerry) Jones; I love the Jones family. I love everything about the whole organization and what they’ve done for me as a person and as a player. For me, it’s just all about going out there and taking it one day at a time, and proving myself, proving my worth, showing them that I want to be there by what I do and now what I say.”

Collins ranked as the No. 31 tackle in the NFL last year, per Pro Football Focus, and has looked the part of a top-tier protector at times. Still in his mid-20s, the sky is the limit for the powerful lineman.

The Cowboys have long boasted one of the league’s best offensive lines and they’ve gone to great lengths to ensure that things will stay that way. Not only is Collins inked through 2024 – they’ve also got left tackle Tyron Smith and center Travis Frederick through 2023 and guard Zack Martin through the 2024 campaign.

The Cowboys’ O-Line has helped turn quarterback Dak Prescott and running back Ezekiel Elliott into superstars. Now, after addressing Collins’ deal, it remains to be seen how they’ll handle new contracts for Prescott, Elliott, and the reborn Amari Cooper.