The Patriots will sign Mike Nugent to serve as their new kicker, but they’re not stopping there. In addition to that move, they’ll also add Younghoe Koo to the practice squad, as Ian Rapoport of NFL.com tweets. 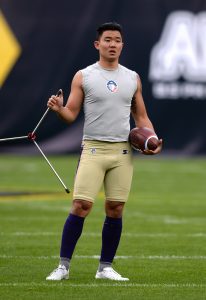 Koo, 25, appeared in four games for the Chargers in 2017, connecting on three of his six field goal attempts and all nine of his extra point tries. Recently, he had a stint in the Alliance of American Football, before its abrupt ending midway through its inaugural season.

Koo’s struggles with the Bolts are well-documented, but his talent is clear. He did enough in ’17 to beat out Josh Lambo for the top job and the Patriots see enough potential in him to keep him on the ten-man squad.

He’ll be on standby in New England as a safety net for Nugent, who is taking over for Stephen Gostkowski.