The Browns and GM John Dorsey are “leaning towards” parting ways today, sources tell Adam Schefter and Chris Mortensen of ESPN.com (on Twitter). However, Schefter cautions that the situation is “fluid and not final.” 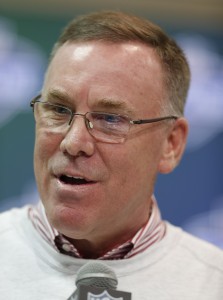 Dorsey will meet with owner Jimmy Haslam on Tuesday afternoon to hash things out, but all signs are pointing to this being the end of Dorsey’s time in Cleveland. Days after firing Freddie Kitchens – who got just one season at the helm – the Browns could be on the verge of cleaning house.

Shortly after word of Kitchens’ dismissal broke, Dorsey released a statement indicating that he was staying put. Soon, we’ll know whether that’s the case.

Dorsey joined the Browns in 2017 and his lofty resume led to high expectations off the bat. So far, those expectations have not been met – the Browns finished 6-9 in 2019, despite having one of the league’s most dynamic quarterbacks in Baker Mayfield and acquiring superstar receiver Odell Beckham Jr.

Technically, it’s an upgrade over the Browns’ winless 2017 season, but that’s not quite enough to satisfy the Browns’ restless fans or ownership.