The Cowboys are making a change at kicker. Dallas has waived Brett Maher and is signing Kai Forbath, per a team announcement. 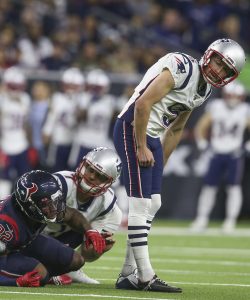 In the wake of Maher’s struggles in 2019, the Cowboys worked out three kickers last week, but they elected to give Maher another shot. Unfortunately, Maher missed a field goal attempt in the team’s loss to the Bears on Thursday, so Dallas hosted another workout today. Forbath was obviously one of the three kickers the team brought in, along with Nick Rose and Tristan Vizcaino (Rose and Vizcaino were also part of last week’s audition).

Forbath has much more experience than his fellow tryout candidates, which obviously appeals to the Cowboys. Over parts of seven seasons with five different clubs, Forbath has a strong 85.8% success rate on field goal attempts. He kicked for the Patriots last week as a one-game fill-in for Nick Folk, making a 23-yard field goal attempt and going 1-2 on extra points.

Maher, meanwhile, hits the waiver wire after he was unable to replicate his solid 2018 performance. He converted just 66.7% of his field goal tries in 2019, and he missed all but one of his five tries from 40-49 yards. The Cowboys, in the thick of a division title race, exercised as much patience as they could but ultimately were compelled to move on.