Marcus Peters will not hit the market or be franchise-tagged. The Ravens and their midseason trade acquisition agreed on a three-year extension, Adam Schefter of ESPN.com reports (on Twitter). The Ravens have announced the move, which will lock up Peters through 2022. 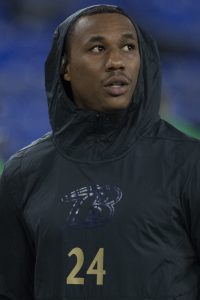 The re-up is worth $42MM, Schefter adds, with $32MM guaranteed. This represents a key moment for Peters, who has been twice traded. Peters will collect $20.1MM next year. The Ravens gave up backup linebacker Kenny Young and merely a fifth-round pick for the talented cornerback, and their early-2020s secondaries will feature the game’s premier ball hawk.

While this deal does not raise the cornerback salary ceiling, coming in at $14MM per year, it gives Peters security he’s lacked after mercurial stints in Kansas City and Los Angeles. Despite this being only a three-year pact, Peters’ $32MM in guarantees place him inside the top 10 among cornerbacks. His AAV lands there as well.

The Ravens have seen the former first-round pick play a key role in helping their pass defense rebound after a rough start to the season. This accord will fill a need for the Ravens, who have Jimmy Smith on an expiring contract and Brandon Carr wrapping up his age-33 season.

Baltimore gave up more than 300 passing yards in three straight September games, twice yielding 500-plus total yards in that span. Since Peters’ arrival, the Ravens have not allowed a 300-yard passing performance. Baltimore enters Week 17 with the No. 4 DVOA pass defense. Peters was one of 12 Ravens Pro Bowlers, the University of Washington alum being honored as such for the third time.

An aggressive corner who did not fetch a first-round pick in either trade, the soon-to-be 27-year-old Peters has become the game’s premier interception threat. Since the 2015 season, Peters leads the field by a staggering margin in this category. His 27 picks are nine more than anyone else’s total since coming into the league. Peters’ six pick-6s also lead the field over the past half-decade.

The Chiefs traded Peters in 2018, doing so after he became a disruptive locker room presence. Kansas City received second- and fourth-round picks for the 2016 All-Pro. Peters started throughout the Rams’ NFC championship season but did not deliver dependable work. He began this year on a better note but was still dealt in a salary dump that turned out to be a space-clearing maneuver for the Rams to add Jalen Ramsey. Peters has intercepted five passes this season — three with Baltimore — and returned three picks for touchdowns.