There are now two Alabama junior wide receivers in the 2020 draft pool. Shortly after projected first-rounder Jerry Jeudy made his decision to enter the draft, Henry Ruggs is following suit. 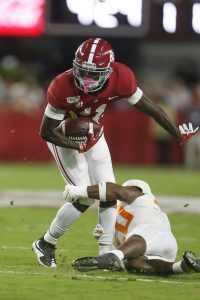 Ruggs revealed Monday (via The Players’ Tribune) he will join Jeudy and Tua Tagovailoa in the draft. While Jeudy has been tabbed as a possible top-five pick, Ruggs is Mel Kiper Jr.’s No. 4 receiver prospect (13th overall). Kiper ESPN colleague Todd McShay has the speedster going 18th overall. Ruggs’ speed will enthrall Combine attendees; he was clocked in the mid-4.2-second range for the 40-yard dash at Alabama’s 2019 junior pro day.

The former four-star recruit did not flash statistically like Jeudy but may be the fastest player in the draft. Averaging 17.5 yards per catch for his career, the 6-foot Ruggs caught 24 touchdown passes and exceeded 700 yards in each of his final two Crimson Tide seasons. He suffered a concussion in the Citrus Bowl.

While Devonta Smith returning to school will prevent Alabama from having three wide receivers chosen in the first round, Jeudy and Ruggs going on Day 1 would be mark a rare occurrence. The last time two were drafted from the same school in Round 1 came in 2007, when LSU products Dwayne Bowe and Buster Davis joined Ohio State alums Ted Ginn and Anthony Gonzalez.