The Giants have released linebackers Alec Ogletree and Kareem Martin, per a club announcement. By cutting the two veterans, the Giants will save roughly $10MM against the 2020 salary cap. 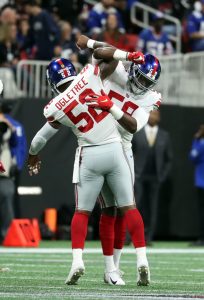 The Giants acquired Ogletree via trade with the Rams in 2018. Despite his experience and soft hands (he has a dozen interceptions to his credit), the savings were too good to pass up. Ogletree appeared in 26 games for the G-Men in his two seasons and led the team with 173 stops in that span. He also set the franchise record for INTs by an LB in 2018 with five picks – two of which were brought back for touchdowns.

Martin joined the Giants on the same week as Ogletree. In his first campaign, Martin had perfect attendance with seven starts at linebacker and notched a career-high 48 tackles with 1.5 sacks. Last year, a Week 1 knee injury pretty much wiped out his season. He played in just five contests and logged a grand total of six tackles. He had one more year to go on his deal, but few expected him to see that final season.

By dropping Ogletree and Martin, the Giants will head into March with approximately $70MM in breathing room.