The Buccaneers will bring Ndamukong Suh back for another season, as Ian Rapoport of NFL.com tweets. The defensive lineman is set to collect $8MM in 2020 on a deal that will allow him to stick with defensive coordinator Todd Bowles. Suh can collect another $2MM via incentives based on playing time, Tampa Bay’s team defensive performance, and a playoff berth, reports Greg Auman of The Athletic (Twitter link). 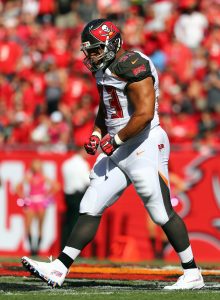 Suh came to Tampa last year on a $9.25MM agreement – this is a bit of a hair cut for Suh, though he’s made tons of money throughout his career. The former First-Team All-Pro has started in every game he’s ever played – including all 16 last year – and he’s set to play a featured role on the Bucs’ D-Line once again.

Suh is past his prime, but he still garnered outside interest from clubs, including the Cowboys. Earlier today, Dallas picked up Dontari Poe, a deal that may have led him back into the waiting arms of the Bucs.

With Tom Brady on the other side of the ball, Suh might just have an opportunity to win a Super Bowl ring this year. The Bucs’ D closed out ’19 strong, so there’s reason to believe that they can be among the league’s better defenses.