Though pre-draft visits for collegiate prospects have been scrapped due to the COVID-19 pandemic, the draft itself is still going to take place as scheduled. As such, teams will not have as much intel as they would like prior to draft night, so players with medical and/or character red flags may find themselves slipping down draft boards. 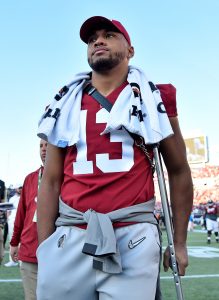 One such player is Alabama quarterback Tua Tagovailoa. Though it would be surprising to see him fall too far past the Dolphins’ No. 5 overall selection, the individual pro day that Tagovailoa was supposed to hold on April 9 has been canceled, as Mike Rodak of AL.com notes, so that’s one less piece of critical information that interested teams will have.

Similarly, clubs that could be in the market for the southpaw signal-caller will not be able to evaluate him during medical re-checks that were supposed to take place shortly before the April 23 draft. So the team that drafts Tagovailoa will be taking a leap of faith that his surgically repaired hip will not jeopardize his professional career.

On the plus side, reports last month indicated that Tagovailoa’s MRIs showed that his fracture is healed and that there has been no loss of blood flow. Last week, videos of him dropping back and throwing passes were posted to his Instagram account, and his reps have obviously passed along glowing reviews.

“He’s moving really, really well,” said co-agent Chris Cabott, who also indicated that the response from NFL teams has been overwhelmingly positive. “To this point, we don’t have any medical concerns. Obviously in any given situation, it’s a day-by-day situation, but his road to return has not been interrupted.”

As Rodak suggests, Tagovailoa could schedule a live-streamed or taped version of his individual pro day, and while no plans have yet been made in that regard, Cabott said he would continue working with individual teams to make sure they have as thorough of an evaluation as possible. That includes FaceTime, Zoom, or WebEx interviews, and continuing imaging scans, which Cabott said would be provided to teams upon request.

So Tagovailoa’s prospects still appear to be on an upward trajectory. As of now, look for him to hear his name called within the first five picks of next month’s draft, with the Dolphins, Redskins, Chargers (and even Bengals) looming as potential landing spots.