An option existed for the Raiders to play a fourth lame-duck season in Oakland, in the event their Las Vegas stadium was not ready on time. But the Raiders will not take it, according to Josh Dubow of the Associated Press. 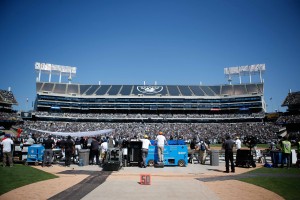 The COVID-19 pandemic has injected uncertainty into the Raiders’ stadium situation, but they notified officials in Oakland they will not exercise an option to play at the Oakland Coliseum in 2020. The Raiders still plan to play in Las Vegas; 2020 has served as their relocation window for years.

As for the stadium construction amid this health crisis, Dubow adds that the project remains ongoing. Nevada has shut down numerous businesses, and casinos have been temporarily closing. But the stadium project has been deemed “essential” and is continuing as scheduled. The $1.9 billion domed stadium remains scheduled to open this summer.

The Raiders received approval to relocate in 2017 but played the 2017, ’18 and ’19 seasons in Oakland. UNLV’s current home venue — Sam Boyd Stadium — was deemed a non-starter as a temporary Raiders site years ago. Mark Davis also did not give serious consideration to sharing Levi’s Stadium with the 49ers, so it appears, for the time being, the Raiders will power through this coronavirus pandemic in an effort to have their stadium ready.