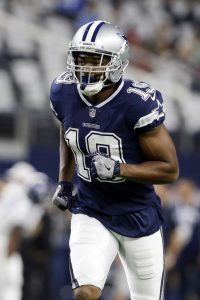 While Cooper hasn’t necessarily established himself as one of the league’s top-tier receivers, it always seemed like he was heading towards a contract that would pay him $20MM per season. Wideouts of Cooper’s caliber or age rarely reach free agency, so it was clear that the Cowboys would have to come close to Julio Jones’ $22MM-per-year deal. Ultimately, Cooper’s $20MM average annual value will rank second at the position, bumping Michael Thomas‘ $19.25MM-AAV to the third spot.

A number of teams have been loosely connected to Cooper throughout the offseason, but Schefter tweets that one rival was pushing hard for the receiver’s services: the Washington Redskins. As Schefter notes, the Redskins pursued Cooper today and tried “to pry him away” from their divisional rival. The Broncos were also recently mentioned as a potential suitor.

Cooper earned his fourth career Pro Bowl nod following another productive season in 2019. In 16 games, the 25-year-old hauled in 79 catches for a career-high 1,189 receiving yards and a career-high eight receiving touchdowns. Cooper joined the Cowboys midway through the 2018 season following a trade with the Raiders.

Now, the Cowboys can focus on extending Dak Prescott to a new contract. Earlier today, we learned that the organization was placing the exclusive franchise tag on their Pro Bowl quarterback. At the same time, the organization watched as cornerback Byron Jones inked a lucrative deal with the Dolphins. Considering the cap constraints, it’s not surprising that ESPN’s Field Yates reports (via Twitter) that the front office restructured the deals of both running back Ezekiel Elliott and offensive tackle La’el Collins earlier today.

37 comments on “WR Amari Cooper To Re-Sign With Cowboys”