Bengals Eyeing Mims, Blacklock At No. 33?

The Bengals, who hold the first pick in the second round, are high on wide receiver Denzel Mims and defensive tackle Ross Blacklock, Ian Rapoport of NFL.com (on Twitter) hears. 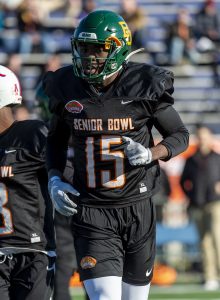 Rapoport also notes several teams looking to move up/down in the order. The Jets, Jaguars, and Falcons are among the clubs interested in making a leap. Potential trade partners include the Colts (No. 34) and Dolphins (No. 39), who are willing to listen on offers to move back.

Cincinnati doesn’t necessarily need any immediate help at wide receiver, as the club boasts A.J. Green, Tyler Boyd, and John Ross as its top three options. However, Green and Ross haven’t been able to stay healthy, and each has just one year remaining on his respective contract (the Bengals hold a 2021 option on Ross that they’ve yet to exercise). Mims would add an explosive option for new quarterback Joe Burrow, and give Cincinnati a long-term asset.

Blacklock, meanwhile, was a draft riser in recent months and was viewed as a potential Day 1 pick. Instead, he’s likely to come off the board at the top of Round 2. The Bengals already have Geno Atkins and free agent acquisition D.J. Reader on the interior of their defensive line, but Blacklock would give them ample depth.

8 comments on “Bengals Eyeing Mims, Blacklock At No. 33?”