Grant Delpit is off the board. With the No. 44 pick, the Browns grabbed the standout LSU safety. 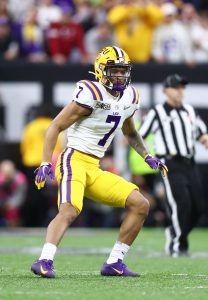 The Browns fortified safety by signing Karl Joseph and Andrew Sendejo, but they also wanted to address the group in the long run. Joseph and Sendejo are both on one-year deals and, at this stage of his career, Sendejo profiles more as a supporting cast member.

Delpit notched five tackles and one sack in LSU’s championship victory. All in all, he closed out three seasons with a combined 199 tackles, 17.5 sacks, seven interceptions, 24 passes defended, and two fumble recoveries.

Delpit has demonstrated the ability to lock down defenders in both man and zone coverage. He’s also an effective blitzer, as evidenced by those 17.5 sacks. He’ll have to tighten up his tackling form at the next level, but evaluators say his future is bright.