The Cardinals have themselves a star wide receiver after trading for DeAndre Hopkins, but this year’s WR class is talented enough to tempt every team. Even though the Cardinals may like Kyler Murray‘s one-time teammate CeeDee Lamb and other WR talents, they’re not expected to use their No. 8 pick on a receiver, Ian Rapoport of NFL.com (on Twitter) hears. 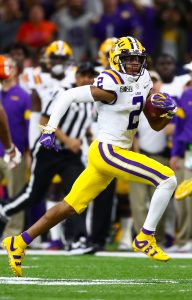 With Hopkins installed as the Cardinals’ new WR1, Arizona will likely address larger needs with that pick – perhaps a stud defensive player or an offensive lineman. Then, somewhere around Nos. 11 or 12, where the Jets and Raiders pick, Rapoport expects the WR run to take flight. In that scenario, CeeDee Lamb and Jerry Jeudy stand out as likely candidates – they’re the consensus top receivers in this wildly talented crop, Rapoport hears.

Further down the board, the Eagles have been heavily connected to LSU wide receiver Justin Jefferson. But, Mike Garafolo of NFL.com (on Twitter) cautions that several teams could jump ahead of the Birds at No. 21 to land him. The Vikings (Nos. 22 and 25), Patriots (No. 23), and the Saints (No. 24) are all lurking, and they could make a play for a big-time WR like Jefferson.