We’ll be bringing you most of the undrafted free agent signings in batches when they’re officially announced, but for now we’re covering a few of the biggest names. Another one familiar to college football fans is Virginia quarterback Bryce Perkins, who just agreed to sign with the Rams, via Tom Pelissero of NFL Network (Twitter link). 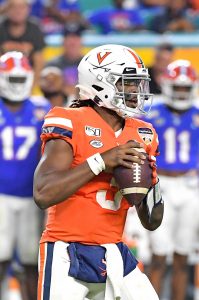 Perkins started his college career at Arizona State in 2015, before transferring to Virginia. He started for the Cavaliers the past two seasons, and was electric at times. As a junior in 2018 he passed for 2,680 yards, 25 touchdowns and nine interceptions. An elite dual-threat, he added another 923 yards and nine touchdowns rushing.

After that campaign he was the subject of a lot of offseason hype, and there was even some darkhorse Heisman buzz going around. He wasn’t able to fully deliver on that hype unfortunately, and was less efficient in 2019. Still his mobility is well-suited for today’s NFL, and the Rams have virtually nothing at quarterback behind Jared Goff.

Los Angeles hasn’t yet re-signed Blake Bortles, Goff’s 2019 backup, and the only other passer on the roster is 2018 UDFA John Wolford. If the Rams don’t add a veteran, Perkins should have a good chance at the backup job.