The Browns now have both their third-round picks under contract. They reached with the No. 97 overall pick — linebacker Jacob Phillips — on Sunday, according to agent Drew Rosenhaus (Twitter link). 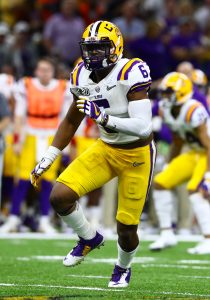 Cleveland exited the 2018 season with two high-priced linebackers and a proven starter, but the team has fully transitioned at linebacker entering the 2020 campaign. After the Browns released Jamie Collins last year, they cut the now-injury-prone Christian Kirksey earlier this year. They then let Joe Schobert sign with the Jaguars in free agency. Younger cogs have taken their places.

Phillips joins 2019 draftees Sione Takitaki (a third-rounder) and Mack Wilson (Round 5) on the Browns’ defensive second level, where ex-Giants starter B.J. Goodson also resides. Most of the Browns’ expenses on defense have gone up front, with younger players populating Cleveland’s linebacker and secondary sections of the depth chart.

One of 14 LSU draftees — a total that matched a record for one school — Phillips joined first-round Ravens pick Patrick Queen as a Tigers linebacker starter. Phillips outproduced Queen in tackles in both 2018 and ’19, totaling 200 stops between his sophomore and junior seasons. Phillips declared for the draft early.

Here is how the Browns’ draft class looks as of mid-July. Only one player, a fellow LSU draftee, remains unsigned.