The Bengals and Joe Mixon have agreed to a four-year deal worth $48MM, according to Ian Rapoport of NFL.com (on Twitter). With that, the Bengals now have their primary running back under contract through 2025. 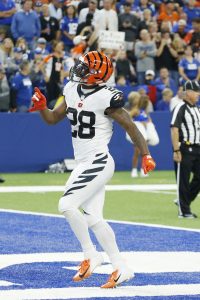 Mixon, 24, has been pushing for a new deal throughout the summer. The Bengals remained adamant about wanting to extend him, but talks were slow to progress. Last week, Mixon said that he was unable to practice due to migraines, and that may have helped to speed things up. Now, Mixon will earn an average of $12MM/year starting in 2021, after he finishes out his rookie deal, which pays $1.2MM.

“He’s in a year that he can be extended, and he is a guy that we visited with,” Bengals player personnel director Duke Tobin said earlier this summer. “We’ll go through those discussions and see if there is a fit or a match for a long-term contract with him, obviously a guy we value quite a bit. The great thing about Joe is he goes about it the right way… He’s the type of guy you want to lock up to a long-term deal.”

Mixon managed a respectable 4.1 yards per carry average last year, despite the Bengals’ sagging offense. This year, he’ll look to reprise his 2018 performance which included a 4.9 YPC mark.

Mixon’s deal, as expected, falls short of Christian McCaffrey‘s $16MM/year mega-deal, but also exceeds some of the projections we heard earlier this year. At one point, it was reported that Mixon was gunning to be one of the eight highest-paid RBs in the league, which would have required just $8MM/year. His actual figure, $12MM per annum, seems more in line with Mixon’s talent level.

The complete details of the deal will give us a better picture of how Mixon stacks up against the league’s other top-earning rushers. That info will also inform ongoing talks for other standouts like Alvin Kamara and Dalvin Cook.