Denzel Mims is set to make his NFL debut Sunday. After spending six weeks on the Jets’ IR list, the rookie wide receiver is on the team’s active roster going into the Jets-Bills rematch. 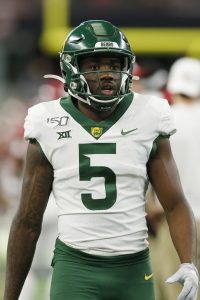 A hamstring injury that turned out to be quite troublesome sidelined Mims during training camp. The Jets waited to place Mims on IR until Week 2, which sidelined him for the Jets’ first four games. He ended up missing six for a team that has struggled to keep its receivers healthy.

Mims, Breshad Perriman and Jamison Crowder served as the Jets’ optimal starting receiver crew. All have missed time due to injuries this season. The Jets drafted Mims in the second round, and with this becoming a full-on developmental year already, they will certainly be keen on seeing what they have in the Baylor prospect. Mims may have a bigger opportunity than expected. The Jets downgraded Crowder to doubtful to face the Bills. Crowder missed two games because of a hamstring injury earlier this season; he is now battling a groin problem.

The Big 12 product finished with two 1,000-yard seasons in college — as a sophomore and senior — and scored 28 touchdowns over his final three seasons. Although the Jets seem to be staring at a coaching change that will happen at season’s end at the latest, Mims will begin his development in Adam Gase‘s system.