The Browns have closed their team facility after learning of another player testing positive for COVID-19. This news comes on the heels of Myles Garrett‘s positive test, as well as defensive end Joe Jackson‘s placement on the reserve list. With fullback Andy Janovich and guard Chris Hubbard also on the list, the Browns have four players sidelined on the list in total. 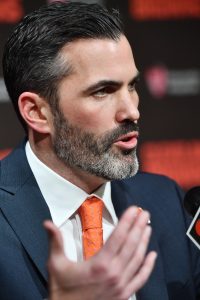 The identity of the coronavirus-positive player has not been revealed. The Browns may be having difficulty in containing the spread, which could put Sunday’s game in jeopardy. For now, they’re still set to face the Jaguars in Jacksonville as scheduled. If that game takes place, they’ll be without the NFL’s leader in sacks, though the 1-9 Jaguars will be led by Mike Glennon, who has thrown a grand total of 31 passes over the last two seasons. He also hasn’t started since 2017, when he was with the Bears.

In other Browns news, cornerback Denzel Ward is expected to miss multiple weeks with a calf strain. Ward is in the midst of his best season yet as a pro with 15 pass breakups in ten games. Thanks in part to Ward and Garrett, the Browns are 7-3 and on pace to snap their longstanding playoff drought.