John Lynch said earlier this offseason he wanted to look at potential veteran backups. The 49ers will do so soon. They are planning to bring in Joe Flacco for a visit, Ian Rapoport of NFL.com tweets. 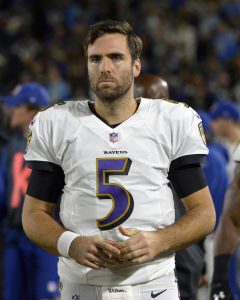 Flacco has bounced around since his 11-year Ravens run wrapped after the 2018 season, going to Denver and New York. The former first-round pick worked with 49ers assistant Rich Scangarello during his brief stay as the Broncos’ starter.

This week has produced a flurry of quarterback movement. Several potential options as a Jimmy Garoppolo backup — from Andy Dalton to Mitchell Trubisky to Jacoby Brissett to Ryan Fitzpatrick — have committed elsewhere, leaving the 49ers with a shallower pool of QB2 candidates. Flacco has extensive experience, having started for more than 10 seasons and having won a Super Bowl MVP honor midway through his Baltimore tenure. But his recent play has not exactly made him a flashy addition.

Following a neck injury that ended his Denver stay, Flacco landed with the Jets. Sam Darnold‘s latest injury moved Flacco back into a starting role. He started four games for the Jets last season, throwing six touchdown passes and three interceptions for a team that started 0-13. On a woeful Jets team, Flacco averaged just 6.4 yards per attempt and completed 55% of his passes.

The 49ers have Garoppolo under contract through 2022. Despite his injury issues and high cap numbers, Lynch and Kyle Shanahan have thrown support behind the ex-Patriot backup. The Patriots have been linked to a potential Garoppolo reacquisition, but the 49ers are believed to be OK with keeping their incumbent starter — unless they can land a major upgrade. Deshaun Watson is believed to have the 49ers atop his destination list, but it is unclear how serious the 49ers would be about pushing to acquire the disgruntled Texans QB.

3 comments on “49ers To Host Joe Flacco On Visit”