Former Bears quarterback Mitchell Trubisky joined the Bills on a modest one-year deal earlier this month, but the former No. 2 overall pick will be the No. 2 quarterback on the depth chart behind Josh Allen. One league source tells Ben Volin of the Boston Globe that he was surprised by Trubisky’s decision to sign with Buffalo, because the Broncos had shown interest. 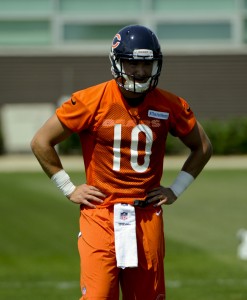 With the Bills, Trubisky will not have the opportunity to start unless Allen should suffer an injury that forces him to miss time. In Denver, he would have battled with third-year pro Drew Lock to become the starting signal-caller for a team with an intriguing collection of skill position talent and a potentially top-flight defense.

Obviously, the fact that the Broncos showed interest does not mean that they extended a contract offer. But it’s not as though Trubisky broke the bank on his contract with the Bills, and if he could have signed with Denver on even a veteran minimum pact, it might have been a good move for him as he seeks to re-establish himself as a legitimate starting quarterback. After all, Lock has mostly struggled through his first two years in the league, and new GM George Paton has said that he wants to bring in a veteran passer and may consider a collegiate QB with the No. 9 overall pick in this year’s draft. Clearly, Paton — who considered a trade for Matthew Stafford — is not committed to having Lock open the 2021 season under center.

In any event, Trubisky will attempt to put on quality tape in the preseason as a member of the Bills, and Paton’s search for competition for Lock continues. As Volin observes, the Broncos are a logical landing spot for Jimmy Garoppolo, but even after the 49ers’ blockbuster trade to acquire the No. 3 overall pick in this year’s draft, it has been reported that San Francisco intends to keep Garoppolo this season.