Last year, the Browns spent months attempting to bring Jadeveon Clowney to Cleveland. They ended up doing so, on a visit at least. Clowney arranged a meeting with the Browns, Field Yates of ESPN.com tweets. The parties are met Wednesday, with Nate Ulrich of the Akron Beacon Journal tweeting the summit has concluded.

The veteran defensive end is coming off an unremarkable season with the Titans, with injuries limiting him yet again. Despite his seven years of NFL experience, however, Clowney is just 28. And he is one of the top free agents still available. No deal is imminent, according to Mary Kay Cabot of cleveland.com. With Clowney not yet 100% after a 2020 knee injury, teams’ caution makes sense. 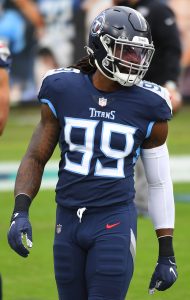 This comes at an interesting time for the Browns. They chased J.J. Watt in free agency and have been rumored to be prepared to devote notable resources to adding a bookend pass rusher opposite Myles Garrett. Olivier Vernon played that role for two seasons, but the Browns attempted to sign Clowney to replace him last year. Vernon is now a free agent and coming off an Achilles tear. And the Browns, despite being linked to several veteran sack artists, remain understaffed at the D-end spot opposite Garrett.

The Browns did add Takkarist McKinley, but they will certainly add more pieces to help on their defensive front. They agreed to terms with Malik Jackson last week as well, and although Jackson has experience playing end in a 4-3 scheme, he has mostly served as an inside rusher in his nine-year career. Clowney has experience inside as well, but he would qualify as a starter-caliber player opposite Garrett on the edge.

Clowney was not high on Cleveland last year, but his value took a hit last season. Although Clowney is not known for his sack prowess, he recorded zero in eight Titans games. Since his 2018 Pro Bowl season with the Texans — the most recent of his three Pro Bowl slates — Clowney has just three sacks. The Seahawks opted to let Clowney walk after the 2019 season, and he spent months in free agency before joining the Titans on a one-year, $13MM deal. His next team will be able to land him at a cheaper rate.

One of the league’s top run-defending edge players, Clowney has battled injuries for most of his career. The former No. 1 overall pick suffered a torn meniscus last year, and although he is expected to be ready for football work by April, he has a history of knee issues. A groin injury hampered him in Seattle.