While Odell Beckham Jr.‘s stock has taken a hit since his 2019 trade to Cleveland, the star wide receiver has shown flashes during his Browns tenure. The Browns would like to see more. 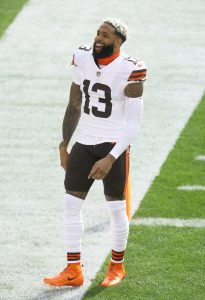 Beckham is recovering from a midseason ACL tear, and GM Andrew Berry indicated the 28-year-old wideout is progressing well on his road back. As of early March, that road is not slated to lead out of Cleveland. The second-year Browns front office boss indicated the Browns are eager to see Beckham back (Twitter link via cleveland.com’s Mary Kay Cabot). This comes months after a report indicated the seven-year veteran had quite possibly played his final game as a Brown.

The three-time Pro Bowler has previously heard a team commit to him before trading him. The Giants did so in 2019. They shipped him to the Browns in a package that sent Jabrill Peppers and a first-round pick to New York. Thus far, the Giants have gotten the better end of the trade. Beckham and Baker Mayfield have yet to establish a consistent rapport, and OBJ has encountered injuries in each of his two Cleveland slates.

Beckham was previously mentioned in trade rumors going into the 2020 offseason, but Berry shut those down quickly. Any OBJ deal would certainly not produce the kind of return the Giants received in 2019.

Even though Beckham’s contract can be viewed as a year-to-year pact, with the Giants eating a considerable chunk of dead money to unload it, the deal still calls for Beckham to count more than $15MM against the cap from 2021-23. Beckham’s 2021 cap number sits at $15.75MM. It will be interesting to see if the Browns move to adjust it. The Browns managed to reach the divisional round of the AFC playoffs without Beckham, though he remains one of the NFL’s top receiver talents.

Berry also confirmed the team wants to re-sign Rashard Higgins, who did the most to replace Beckham this past season. It doesn’t sound like a deal will be reached before free agency, however, with Berry indicating Higgins will test the market (Twitter link via Cabot). Beckham and Jarvis Landry‘s cap numbers are set to comprise approximately a sixth of Cleveland’s 2021 cap, leaving seemingly little room for a notable Higgins pact.