The Ravens have agreed to sign former Giants guard Kevin Zeitler (Twitter link via ESPN.com’s Adam Schefter). Once official, it’ll be a three-year, $22.5MM pact with $16MM in guaranteed money. 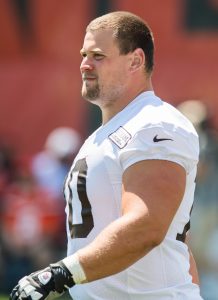 The Giants dropped Zeitler last week to save about $9.6MM in cap space. The Giants shopped Zeitler before releasing him, but interested teams like the Ravens stayed patient because they expected him to get cut.

Zeitler was the Giants’ best offensive lineman, so the move was more about finances than football. The Ravens, meanwhile, get to fill the longstanding void left by Marshal Yanda‘s 2020 retirement. Tyre Phillips, Patrick Mekari, and Ben Powers all tried their hand at right guard, but no one in that trio was able to replace Yanda’s protection.

The Ravens said they’d prioritize blocking for Lamar Jackson this offseason and Zeitler goes a long way towards addressing that need. Over the last three years, Pro Football Focus has Zeitler ranked as the 17th best guard in the NFL. He’s also been reliable with at least 15 starts in each of the past six seasons.