Dave Gettleman couldn’t resist the urge to trade. The Giants moved the No. 11 pick to the Bears in exchange for pick No. 20, pick No. 164, a 2022 first-round pick, and a 2022 fourth-round pick. And, with the No. 11 choice, the Bears selected Ohio State quarterback Justin Fields. 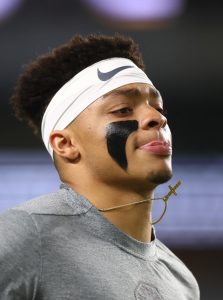 The Bears invested upwards of $10MM in Andy Dalton this offseason, but the longtime Bengals starter is just a stopgap solution. While Dalton may start this year, the job will eventually belong to Fields.

Fields transferred from Georgia to Ohio State to take over for Dwayne Haskins as the Buckeyes’ starter. He went on to enjoy a dominant two-year run for the Buckeyes, putting him in the top tier of incoming 2021 QBs. Lauded for his arm strength and athleticism, Fields wound up as the fourth passer chosen, behind Trevor Lawrence, Zach Wilson, and Trey Lance.

Only three drafts — 1971, 1999, and 2021— have begun with three consecutive teams taking quarterbacks. Fields may not have been in that group, but every scout believes that he has a bright future ahead of him. In just two short years as a Buckeye, he cemented himself as one of the most accomplished players in program history. The dual-threat QB threw for 5,373 yards, 63 touchdowns, and nine interceptions across 22 starts. Now, the two-time Big Ten Offensive Player of the Year will try and work his magic for the Bears.