The Browns will pick up the fifth-year options of quarterback Baker Mayfield and cornerback Denzel Ward (Twitter links via Jake Trotter of ESPN.com and Mary Kay Cabot of The Plain Dealer). 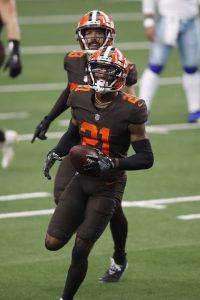 Mayfield will make $18.858MM in 2022 while Ward will earn $13.294MM. As a refresher, the fifth-year option year is now fully guaranteed. In the past, it was guaranteed for injury only. The values are also dependent on certain performance metrics, including playing time and Pro Bowl appearances.

Mayfield slogged through a brutal 2019 season, throwing 21 interceptions — the NFL’s second-most that year — and regressing after showing promise under Freddie Kitchens in 2018. However, Mayfield fared much better in Kevin Stefanski‘s offense last season. The former Heisman winner ranked 10th in QBR with a 72.2 mark — by far a career-high figure — and cut his interception total down to eight.

Ward, meanwhile, has battled health issues since he entered the league. He has missed at least three games due to injury in each of his first three seasons — not 2020’s COVID-19 absence. On the other hand, his performance between the lines has been everything the Browns could have hoped for when they made him the No. 4 overall pick in 2018. He earned Pro Bowl honors in his rookie season, and despite the missed time due to injury, he has tallied 40 passes defensed and seven interceptions — including one pick-six — in his young career.