Things appear to be heating up between Jadeveon Clowney and the Browns. Cleveland is arranging a second visit for the free agent edge rusher, likely for Monday, a source told Josina Anderson (Twitter link). The belief is that the sides will be able to work out a contract during that visit, sources told Jonathan Jones of CBS Sports (Twitter link). 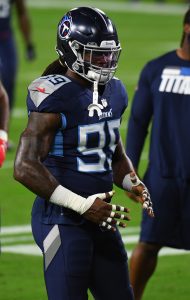 Clowney initially met with the Browns back on March 24th. No deal materialized at the time, but we heard about a week later that the team was still very much interested, so this second visit isn’t too surprising. During Clowney’s last free agency in 2020, the Browns were reportedly his best multi-year offer, so they’ve been after him for a while. Rather than take that multi-year deal from Cleveland, Clowney opted to sign a one-year, $13MM pact with the Titans.

That didn’t work out, as injuries limited him to only eight games last season. In those eight games, he had zero sacks, and he’ll now likely have to settle for a significantly cheaper deal. The Browns are letting Olivier Vernon walk, and we’ve heard all offseason that their plan was to bring in a big name edge guy to pair with Myles Garrett.

They signed former first-rounder Takk McKinley last month, but that apparently wasn’t enough to satisfy them. The first overall pick of the 2014 draft, Clowney has never quite lived up to his potential and has often struggled with health issues, but he’s also shown he can be a legit disruptor along the defensive front.

His sack numbers have never been anything eye-popping (career-high 9.5 in 2017), but he’s capable of setting the edge with the best of them and being a very strong presence in the run game. The 28-year-old made the Pro Bowl three straight years from 2016-18, and it sounds like he’s getting closer to finding his third NFL home.