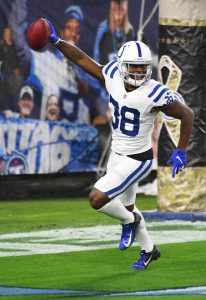 Carrie, who initially signed with the Colts last year, visited the Saints and Bills over the past three weeks. Carrie’s Buffalo trip occurred this week, and Fowler adds the Bills made a push to sign Carrie. Rather than joining a fourth team, however, Carrie will follow Xavier Rhodes in re-signing with the Colts.

While Carrie played in 15 games last season, he saw a reduced snap rate. After playing more than 60% of his team’s snaps from 2017-19, the former seventh-round pick saw action on just 38% of Indianapolis’ defensive plays in 2020. The Colts stand to bring back their top four corners from last season, with Rhodes and Carrie pledging to stay on one-year accords, slot corner Kenny Moore signed long-term and Rock Ya-Sin still on his rookie deal.

Originally a Raiders draftee in 2014, Carrie spent the 2018 and ’19 seasons with the Browns. While he saw more time in Cleveland, Carrie intercepted a career-high two passes with the Colts and took one back for a touchdown. Pro Football Focus graded Carrie as a top-40 corner and was incredibly high on the seven-year vet’s run-game presence. PFF graded Carrie as the league’s top run-defending corner.

The 30-year-old defender will reprise his role in an experienced cornerback corps, though with both Carrie and Rhodes north of 30, the Colts still profile as a team that could add at this spot early in the draft.