7:05pm: The Panthers will be there as well, per Joe Person of The Athletic (on Twitter). Carolina holds the No. 8 overall pick and represents a key domino for this draft. Although the Panthers acquired Sam Darnold from the Jets, GM Scott Fitterer said they will still consider a quarterback in Round 1. Carolina brass considered trading up for a quarterback but deemed the price too high. Fitterer was there for Fields’ pro day, when the Darnold talks heated up.

GM Terry Fontenot, HC Arthur Smith and OC Dave Ragone each trekked to central Ohio to watch Fields throw two weeks ago. The Falcons are set to join the 49ers and Patriots at the second Fields showcase, though select other teams should be expected to be represented as well. 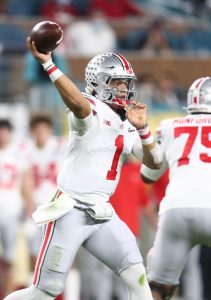 The Jets and Broncos will also have reps on hand in Columbus, Breer adds (via Twitter). Gang Green’s presence may be academic, with the team locked on Zach Wilson with its No. 2 pick. The Broncos, who hold pick No. 9, pose as a more interesting team regarding Fields. But the Falcons will have first dibs for the decorated passer.

Both Fields and Trey Lance moved to schedule second pro days, doing so after 49ers bigwigs Kyle Shanahan and John Lynch did not attend their first workouts. The 49ers did not have the No. 3 overall pick when Lance threw early last month, and Lynch and Shanahan opted to attend Mac Jones‘ workout instead of Fields’ two weeks ago. Holding pick No. 4, the Falcons will continue to be linked to quarterbacks as well. They could go in a few directions with their highest draft choice in 13 years.

The Falcons could also use their No. 4 pick to draft this year’s top non-quarterback prospect. Several execs around the league expect them to do just that and grab Florida tight end Kyle Pitts. They could trade the pick or select Ryan’s successor. With the 49ers linked to Jones or Lance at No. 3, Fields is expected to be available at 4. Atlanta, however, restructured Matt Ryan‘s contract earlier this offseason. That decision will make moving the 13-year starter’s contract in 2022 difficult.

Like Trevor Lawrence, Fields is a Georgia native. He transferred from Georgia to Ohio State and succeeded Dwayne Haskins as the Buckeyes’ starter, enjoying a dominant two-year run in this role. The Falcons have not picked in the top five since drafting Ryan in 2008, and a recent report indicated Fontenot was in favor of drafting his successor while Smith preferred to add an impact talent to complement Ryan. The head coach and GM are now believed to be in agreement on how the team will proceed at 4.

Broncos GM George Paton was at both Lance and Fields’ first pro days. After insisting the Broncos will add a notable QB this offseason, Paton has shown considerable patience. The Broncos made an offer for Matthew Stafford and inquired about Sam Darnold. But Stafford, Darnold and Carson Wentz went elsewhere, joining the top free agent passers available in that regard. This would seemingly point the Broncos to a first-round QB pick, but given the way this draft is shaping up, the team may need to trade up from 9 to even land the fifth of this year’s coveted passing prospects.