It’s been said that Jerry Jones can’t take his eyes off of Florida tight end Kyle Pitts. Although he may be high on the exceptional athlete, the Cowboys owner says that he’s not about to pay a king’s ransom for him. 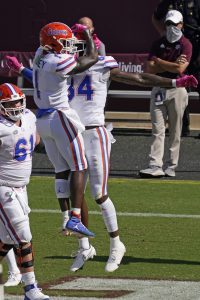 “We’re not going to spend inordinate value [to trade up for Pitts,]” Jones said (Twitter link via Michael Gehlken of the Dallas Morning News).

This is consistent with what we’ve been hearing in recent days — the Cowboys love Pitts’ blend of size, speed, and agility, but they aren’t about to mortgage the rest of their draft ammo for him. Moving up from No. 10 would be mighty costly, especially after the 49ers gave up a 2022 third-rounder and two future first rounders to go from No. 12 to No. 3.

Other teams could be tempted to move up for Pitts, who tallied 43 receptions for 770 yards and 12 touchdowns in just eight games last year — good for an average of 17.9 yards per catch. But, any team that wants to guarantee Pitts’ availability would have to pry the No. 4 pick away from the Falcons.