As the draft approaches, cornerback continues to be a need area for the Cowboys. While they re-signed Jourdan Lewis this offseason, the Cowboys received interest from multiple veterans with more experience. 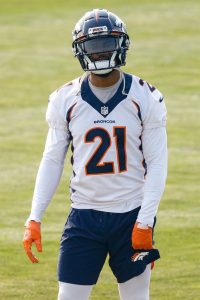 Both Malcolm Butler and A.J. Bouye expressed an interest in joining the Cowboys, Clarence Hill of the Fort Worth Star-Telegram notes, and each third-contract-seeking vet was willing to take a discount to do so. However, Dallas was not open to that prospect — even at lower rates than the corners ended up signing for — and moved on, Hill adds.

The Titans and Broncos, respectively, made Butler and Bouye cap casualties this offseason. Butler ended up signing a one-year, $3.25MM deal with the Cardinals. Bouye joined the Panthers late last week, agreeing to a two-year, $7MM pact. Butler’s contract is fully guaranteed, while Bouye will receive $3.5MM fully guaranteed. That will tie him to the Panthers for the 2021 season. These third contracts represent steep downgrades. Butler, 31, signed a five-year, $61.25MM deal with the Titans in 2018; Bouye, 29, landed with the Jaguars on a five-year, $67.5MM deal in 2017. They joined many free agents in taking major discounts this offseason, which featured a near-$20MM salary cap reduction.

The Cowboys communicated to both defenders they did not have the money to sign them, Hill notes. The team has added a host of free agents, but they have largely been on low-end contracts. As of Monday, Dallas holds just less than $8MM in cap space. Much of that will go to signing draft picks.

Dallas drafted Trevon Diggs in last year’s second round and used a fourth-round pick on Reggie Robinson. Slot corner Anthony Brown is signed through the 2022 season. Lewis re-signed a three-year, $13.5MM deal; only $4.75MM of that is fully guaranteed. Despite these investments, the Cowboys are expected to add a corner early in the draft, Hill adds, perhaps with the No. 10 overall pick.