The Panthers have officially picked up Sam Darnold‘s fifth-year option, per a club announcement. This was the expected move after they passed on Ohio State quarterback Justin Fields to select South Carolina cornerback Jaycee Horn at No. 8. 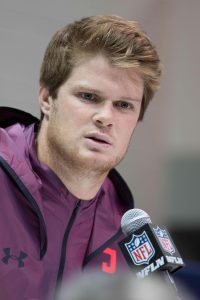 The Panthers came into Thursday night knowing that Trevor Lawrence and Zach Wilson were virtual locks to go Nos. 1 and 2, respectively. Unlike other teams, they weren’t all that wild about North Dakota’s Trey Lance, who went No. 3. Fields reportedly held “intrigue” for the Carolina front office, but they chose to bolster the secondary instead.

Meanwhile, it’s undoubtedly a confidence booster for Darnold, who is coming off of a turbulent stretch with the Jets. Darnold, still just 23, has yet to deliver on the hype he carried in 2018. Last year, he ranked last in QBR among qualified passers and he has yet to eclipse 20 touchdown passes in a season. He’s also missed at least three games in each of his three seasons, including a lengthy stay on the sidelines due to an enlarged spleen.

The once-coveted prospect will replace Teddy Bridgewater (now with the Broncos) under center. Surrounded by old pal Robby Anderson, star running back Christian McCaffrey, and fellow ’18 draftee D.J. Moore, Darnold has a great opportunity to reignite his career.