The Steelers will exercise Minkah Fitzpatrick‘s fifth-year option (Twitter link via NFL.com’s Ian Rapoport). The safety is now set to earn $10.612MM in 2022. 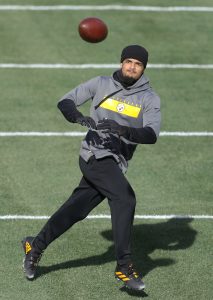 In 2019, the Steelers shipped first-, fifth-, and sixth-round picks to the Dolphins for Fitzpatrick and a pair of Day 3 picks. It’s no surprise to see that the Steelers have extended the arrangement, especially after Fitzpatrick earned his second straight All-Pro nod. In 16 games (all starts), Fitzpatrick tallied four interceptions, 79 total stops, and eleven passes defensed. He also took one of those interceptions back for a pick six, giving him four career defensive TDs.

Per the new rules for the fifth-year option, Fitzpatrick’s 2022 salary is fully guaranteed, rather than guaranteed for injury only.