The 49ers are discussing a new deal with Richard Sherman, according to Chris Biderman of The Sacramento Bee. This jibes with recent comments from the cornerback, who says he has also chatted with the Seahawks, Raiders, and Saints. 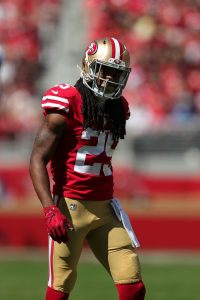 Sherman probably won’t land with the Raiders, now that they’ve reunited Casey Hayward with defensive coordinator Gus Bradley. The 49ers, meanwhile, still need a boundary corner. The Niners brought back Emmanuel Moseley and Jason Verrett while using third- and fifth-round picks on corners. However, between Verrett’s injury history and the greenness of the rookies, they could use someone like Sherman. And, unlike the other experienced vets on the market, Sherman offers familiarity with the 49ers’ system.

Sherman, 33, was limited to just five games in 2020. But, in the previous year, he was a second-team All-Pro. The Stanford product isn’t lacking for confidence, but he’s taken a patient approach to the offseason.

“Well, apparently we got to wait ’til the draft happens before anything else shakes out, because everybody has their hopes and dreams in the draft, which is understandable,” Sherman said back in April. “You turn 33, and then it’s like, ‘We’ll wait until we get a young pup; and if we can’t get a young pup, we’ll take an old fool.’ So that’s where we’re sitting.”