A former five-star recruit who once projected to be a high draft choice, Dylan Moses was not one of the numerous Alabama starters to hear his name called this weekend. But he agreed to a UDFA deal minutes after the draft’s conclusion. 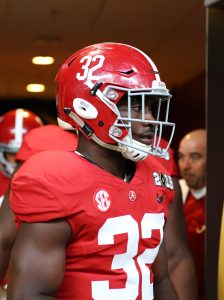 The Jaguars are signing the former Crimson Tide linebacker, Tom Pelissero of NFL.com tweets. Moses is coming off knee surgery and will begin his Jacksonville tenure on the team’s NFI list. He will be getting a nice payday for a UDFA, with Aaron Wilson of the Houston Chronicle tweeting that Moses will pocket $70K in guarantees ($50K in guaranteed salary plus a $20K signing bonus).

Moses’ prospects dimmed somewhat after an ACL tear wiped out his 2019 season. However, he returned to action in 2020 and earned first-team All-SEC acclaim. Moses made 76 tackles (six for loss) in the COVID-19-shortened 2020 season, helping the Crimson Tide to a dominant national championship run. The accomplished defender revealed he played through knee pain as a senior, and the persistent knee trouble certainly affected his draft status.

Urban Meyer‘s first draft running the Jaguars did not include a linebacker. The team has Myles Jack and Joe Schobert returning to reprise their roles as three-down ‘backers. Moses certainly profiles as a flier but one with considerable qualifications, should he be able to overcome his run of knee trouble.