The Cowboys have their first-round pick under contract. They agreed to terms with No. 12 overall selection Micah Parsons on Wednesday, Ian Rapoport of NFL.com tweets. Parsons is set to make more than $17MM on his rookie pact. 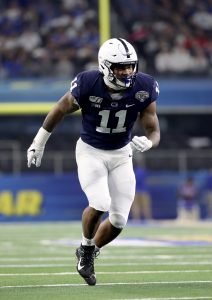 Parsons’ four-year rookie deal, featuring the customary fifth-year option, is fully guaranteed. Despite being an off-ball linebacker and opting out in 2020, the Penn State product became this year’s first front-seven defender drafted. That obviously points to a key role early on a Cowboys team that has some big investments at this position.

Dallas used a first-round pick on Leighton Vander Esch three years ago and has Jaylon Smith signed long-term. But the former has battled injuries since his breakout rookie year. Smith also entered the offseason on shakier-than-usual ground, though he has managed to stay healthy despite sitting out his rookie season due to a severe college injury. Parsons will change Dallas’ equation at linebacker, however.

The Cowboys traded back two spots but still landed Parsons at No. 12. As a sophomore in 2019, the Nittany Lions ‘backer dominated by registering 109 tackles (14 for loss) and forcing four fumbles. Parsons showed pass-rushing ability that season, recording five sacks, and displayed coverage chops. The versatile defender became a consensus All-American in his second college season. The Cowboys have been using Parsons at all three linebacker spots during their offseason program, per The Athletic’s Jon Machota (subscription required).

After the COVID-19 pandemic affected the Big Ten’s schedule, Parsons opted out and began preparing for the draft. This move did not ding his stock much. Parsons’ arrival figures to shake up the Cowboys’ Vander Esch-Smith long-term partnership. The Cowboys passed on LVE’s fifth-year option shortly after the draft.