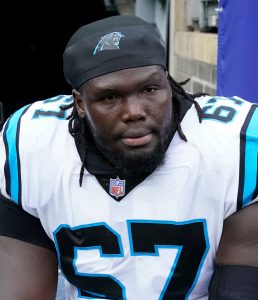 Miller was limited to only 39 snaps during Sunday’s loss to the Giants before suffering an ankle injury. The ailment will now knock the 28-year-old out of the lineup for at least the next three games.

After starting 14 games for the Panthers in 2020, Miller re-signed with Carolina this past offseason. After missing Week 1, the lineman started each of the Panthers’ next six games. The former third-round pick spent the first four seasons of his career with the Bills before starting 13 games for the Bengals in 2019.

The Panthers also swapped punters today, waiving Ryan Winslow and adding Lac Edwards to the practice squad. Per Newton (on Twitter), Edwards is expected to be promoted for Sunday’s game against the Falcons. Winslow was filling in for Joseph Charlton, who is currently sitting on IR. The 27-year-old saw time in Week 6 and Week 7 for the Panthers, averaging 38.6 yards on his 13 punts. Edwards served as the Jets punter from 2016 through 2019, and he led the NFL in punts and punting yards during his final season in New York.