Down two of his top three wide receivers for the past several games, Tua Tagovailoa will see one of those weapons return to the field Sunday. DeVante Parker will make his return to the Dolphins’ active roster, Ian Rapoport of NFL.com tweets. 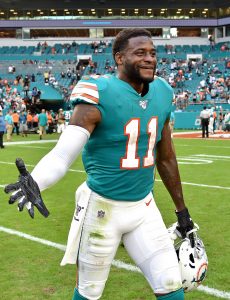 Miami had placed the seventh-year wideout on IR in early November, with a hamstring injury sidelining him. Parker missed time earlier this season as well and has been limited to just five games this year.

The Dolphins signed Will Fuller and drafted Jaylen Waddle to team with Parker this year. That trio has not seen much time together. Fuller remains on Miami’s IR list, having played just two games as a Dolphin. He was last seen in uniform in Week 4, leaving Waddle as Tagovailoa and Jacoby Brissett‘s top receiver.

Parker’s belated breakout in 2019 — a 1,202-yard season — earned him a contract extension. That deal runs through 2023. Although the Dolphins resisted trade overtures and held onto Parker ahead of the deadline, his 2022 status with the team may be in question. A strong finish from the veteran pass catcher would certainly help solidify his beyond-2021 status in Miami.

The Dolphins also activated offensive lineman Michael Deiter from their injured list. Miami’s starting center to open the season, Deiter has not played since Week 3. Foot and quad injuries sent the third-year blocker to IR.