The Saints are the latest team with a virus issue. It may well lead the playoff-contending squad starting a rookie at quarterback Monday night. 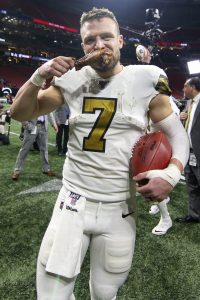 New Orleans placed Trevor Siemian on the reserve/COVID-19 list earlier Thursday morning, Jeff Duncan of NOLA.com notes, and Ian Rapoport of NFL.com adds that Taysom Hill will also be moved to the virus list (Twitter link). Rookie Ian Book is the next man up. The Notre Dame product is likely to get the call Monday night.

Book would be New Orleans’ fourth QB starter this season, following Jameis Winston, Siemian and Hill. The Saints selected the ex-Fighting Irish standout in the fourth round. This certainly could stall the Saints’ recent momentum. After nearly falling out of the playoff race during a stretch without Alvin Kamara, the Saints have won two straight — including a 9-0 win in Tampa that doubled as Tom Brady‘s first shutout loss in 15 years.

Sean Payton has not been at the facility this week; the 16th-year head coach remains away from the team after testing positive for COVID last week. The Saints chose Book 133rd overall. He started three seasons at Notre Dame, topping out with a 34-touchdown pass season as a junior in 2019.

Book is also the winningest starting QB in Notre Dame history. He stands to be tasked with helping the Saints stay on the No. 7 seed line in the NFC playoff race. The Saints’ win over the Buccaneers moved them to 7-7; FiveThirtyEight.com gives the team a 44% chance to make the playoffs. New Orleans being forced to give the keys to a Day 3 rookie with zero regular-season snaps will impact those odds.