Not long after inking their top draft pick to his first NFL contract, the Bengals have done the same with another rookie defensive back. The team announced on Friday that they have signed second round corner Cam Taylor-Britt. 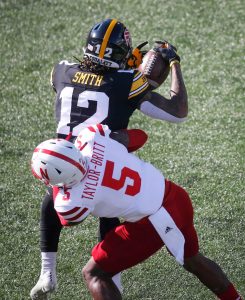 Across four seasons at Nebraska, the six-foot, 205-pounder grew into a key role on the team’s defense. His sophomore campaign included 49 tackles, a pair of interceptions and four forced fumbles. He matched his interception total the following year, despite that season being limited to eight games.

Coming back for his senior season, Taylor-Britt was once again a consistent presence on the Cornhuskers’ back end. In 12 contests, he racked up 51 tackles, including three for a loss, one interception and a career-high 11 pass breakups – a figure which ranked him second in the Big Ten in that category. With a combination of experience and ball production, he projects to have a high floor at the NFL level.

In Cincinnati, Taylor-Britt will join a CB room led by Chidobe Awuzie, Mike Hilton and Eli Apple. Along with first-rounder Daxton Hill, he will provide depth right away in the team’s secondary, with the potential to earn playing time with the defending AFC champions down the road.

The Bengals also announced the signing of seventh-round defensive end Jeffrey Gunter, leaving them with just two members of their draft class left to sign: