Clelin Ferrell, the No. 4 overall selection of the 2019 draft, was the first draft choice made by then-Raiders GM Mike Mayock. The pick was widely panned at the time, and it did not get better with age, as Ferrell has failed to make much of an impact in his first three years in the Silver-and-Black. 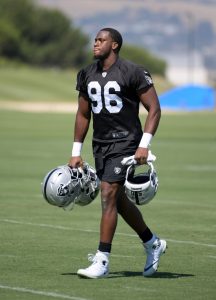 Mayock was fired in January, and the club’s new regime, fronted by GM Dave Ziegler and HC Josh McDaniels, declined Ferrell’s fifth-year option in May (they also declined the options for the Raiders’ other two first-round picks in 2019, Josh Jacobs and Johnathan Abram). As such, 2022 will be a platform year for Ferrell, who will earn $4.77MM this season.

As Vincent Bonsignore of the Las Vegas Review-Journal writes, Ferrell was seeing significant time at defensive tackle during last week’s minicamp. That would constitute a noteworthy position change for a player who established himself as a defensive end during his college career. Upon his arrival in the NFL, preference was quickly given at that spot to fourth-rounder Maxx Crosby, though, who has emerged as a franchise cornerstone and been signed to a sizeable extension.

The presence of Crosby and other edge rushers – including Yannick Ngakoue in 2021 – has led to serious drops in Ferrell’s playing time; his path to an increase in snaps would be further blocked by Chandler Jones this year. That makes a position switch a logical experiment at this point in the offseason. The Raiders have seen several changes along the interior of their defensive line, and brought in Tyler Lancaster, Vernon Butler, Bilal Nichols, Andrew Billings and Kyle Peko in free agency, while also using Day 3 picks on Neil Farrell Jr. and Matthew Butler in the draft.

At six-foot-four, 265 pounds, Ferrell could have the frame to operate on the inside this season. Given how his career has panned out so far, and the team’s resulting actions, his performance – regardless of where he lines up – will go a long way to determining his future.

3 comments on “Raiders’ Clelin Ferrell Getting Reps At DT”