The Steelers have reached agreement on an extension with All-Pro safety Minkah Fitzpatrick, per ESPN’s Adam Schefter (Twitter link). The fifth-year defender signed a four-year contract which will pay him more than $18.4MM per year. The Steelers have announced the signing. 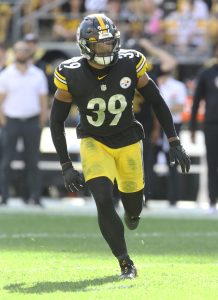 Schefter adds that the pact includes $36MM in guaranteed money. The deal comes as the 25-year-old was soon to begin a contract year in 2022. He was already on the books for one more season at $10.6MM, by virtue of his fifth-year option being picked up. Now, he is set be with the Steelers for the long-term.

Fitzpatrick quickly lived up to his draft stock as the No. 11 overall pick in 2018 with the Dolphins. His time in Miami was very short-lived, however, as he was dealt to Pittsburgh midway through the 2019 campaign. The Steelers paid a significant price to acquire him, sending a package which included a first-rounder, but Fitzpatrick has been worth it up to this point. Starting in all 46 contests he has appeared in with Pittsburgh, he has registered 203 tackles and 11 interceptions.

His level of play has earned him a pair of Pro Bowl nods and two appearances on the First-Team All-Pro list. As a result, the matter of an extension had long been seen as one of the top priorities for the Steelers’ front office, now led by Omar Khan. The possibility was raised of the Alabama alum conducting a ‘hold-in’ during mandatory minicamp to try and leverage a new deal, but that will no longer be necessary.

The value of this contract will make Fitzpatrick the league’s all-time highest-paid safety. Jamal Adams had held the top spot at $17.5MM-per-season, but this deal is the new watermark in a positional market which could continue to be on the rise with subsequent deals. Extensions for the likes of Derwin James and Jessie Bates will no doubt be influenced by this one.

“Minkah is one of the top safeties in the NFL and we are thrilled he will be in Pittsburgh through at least the next five years” Khan said, via the team’s website. “When we traded for him, we knew he was going to be an integral part of our defense and we look forward to that continuing as we prepare for the upcoming season.”

With fellow defensive pillar T.J. Watt under contract for the long-term already, the Steelers have another foundational player signed through the transition into the post-Ben Roethlisberger era. While questions remain on the offensive side of the ball heading into this season, the team’s pass defense will have one of its most important elements in place for the foreseeable future.