The Chiefs are the latest team set to begin training camp with a few noticeable absentees. The team has placed four players on the active/PUP list, per Aaron Wilson of Pro Football Network (Twitter link). 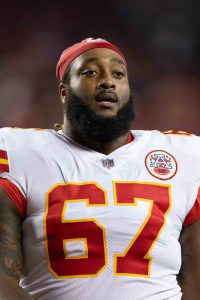 The lone defender on the list is cornerback Rashad Fenton. In May, it was reported that the 25-year-old wasn’t a lock to be healthy by the start of camp. He is rehabbing a shoulder injury which required offseason surgery, and kept him out of spring workouts. He is likely to be slated at No. 3 on Kansas City’s depth chart at the position, which has seen plenty of turnover this offseason. His steady growth in playing time and effectiveness could make him not only an important piece in the team’s secondary upon his return, but a priority for the Chiefs from a financial standpoint.

On the offensive line, right tackle Lucas Niang is another unsurprising inclusion. He suffered a season-ending torn patellar tendon in January, marking the latest example of availability concerns associated with the former third-rounder. A 2020 opt-out, Niang has played just 12 total games two years into his NFL career, including nine starts. He was replaced when out of the lineup last season by veteran Andrew Wylie, who was brought back on a one-year deal in free agency. The two will compete for the starting role upon Niang’s return. Backup linemen Prince Tega Wanogho is also among the players placed on the list.

Finally, the Chiefs will have to wait for the training camp debut of perhaps the most notable UDFA of the 2022 draft class. Wide receiver Justyn Ross recently underwent foot surgery, as noted by Pro Football Talk’s Charean Williams. The former Clemson star was widely thought of as a surefire first-rounder before multiple neck injuries derailed his junior campaign and led to many teams taking him off their draft boards altogether. Health will always be a concern with Ross, but there will be a role available to him in Kansas City’ re-vamped WR room.

Of course, any of these players can be activated at any time – something the Chiefs will be anticipating with the potential starters in particular.