The list of notable players beginning training camp on the active/PUP list continues to grow. The Dolphins announced on Friday that they will be without cornerback Byron Jones for at least the short term. 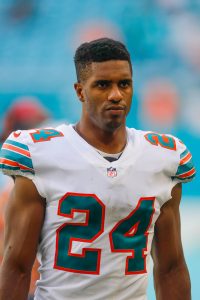 The 29-year-old is still recovering from ankle surgery he had earlier this offseason. The procedure was aimed a remedying a lingering issue, one which wasn’t severe enough to limit his playing time in 2021. Given the fact that an estimated two month recovery period was reported at the time, it is somewhat concerning that the former Cowboy still hasn’t healed in full.

In two seasons with the Dolphins, Jones has totalled a pair of interceptions, 14 pass deflections and 95 tackles, repeating a similar level of play in terms of pass coverage across those campaigns. He has another three (non-void) years remaining on the free agent deal which sent him to Miami, a contract which Jones agreed to re-work not long after his injury. The move helped create cap space for 2022, making the additions of Tyreek Hill and Terron Armstead easier to absorb. It also raised his cap hits in 2023 and 2024 above $18MM, however, something made more significant by the new contract fellow corner Xavien Howard signed this offseason.

Jones can be activated at any time by the Dolphins, and there has been no indication that they will have to wait much longer to see him back on the field. Assuming he does return to full health in time for the season, Miami will once again have one of the better CB duos in the league, as the team’s secondary looks to help the team emerge as a postseason contender.