Darren Waller‘s absence will now be extended into December. The Raiders’ Pro Bowl tight end is heading to IR, according to ESPN.com’s Adam Schefter (on Twitter).

Waller is believed to have aggravated his hamstring injury, per Schefter. The veteran pass catcher has practiced in a limited capacity recently but has not played since Week 5. This will give Waller more time to heal while obviously hurting a Raiders passing attack that has been inconsistent despite forming a Waller-Davante Adams–Hunter Renfrow trio. 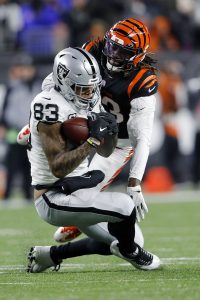 The converted wide receiver initially suffered the injury during the first quarter of the Raiders’ shootout loss to the Chiefs. After Las Vegas’ Week 6 bye, Waller went into the past two Sundays as a candidate to suit up. The Raiders did not rule him out until gameday in both cases. The IR move provides clarity but will leave a 2-6 team without its top tight end until at least Week 14.

This news makes Waller and Drew Rosenhaus’ push to secure a late-summer extension more important. After ranking outside the top 15 in tight end contracts entering September, Waller signed a three-year, $51MM deal. The new contract came with $22MM guaranteed; $19MM of that is fully guaranteed. Had Waller opted to bet on himself, this injury-altered season would have certainly reduced his value.

The Raiders have Waller, 30 signed through 2026 at the NFL’s highest tight end AAV figure. While Waller’s guarantee figures fall outside the top five at the position, the team has still invested plenty in the Jon Gruden-era reclamation project. Waller’s unavailability has undoubtedly affected the Raiders’ aerial attack, which has struggled to see Renfrow reprise his previous form. The Raiders extended Renfrow (two years, $32MM) this offseason as well, pairing him with Adams’ $28MM-per-year megadeal.

This represents Waller’s second straight injury-limited season. A knee injury cost him time in 2021, complicating his quest for a second Raiders extension. Thursday’s news ensures Waller will have missed at least 13 games over the past two seasons. This stretch has blunted the talented performer’s momentum. He came into the season as one of just eight tight ends to have multiple 1,100-yard seasons. Waller accomplished this while being the Raiders’ top aerial weapon, taking over that role after the franchise’s Antonio Brown bet became a spectacular bust.

Foster Moreau will continue to serve as Vegas’ starting tight end in Waller’s absence. Waller has totaled 16 catches for 175 yards and a touchdown on the season. Moreau also has amassed 175 yards this year, on 17 catches. In six games, Renfrow has still not surpassed 200 receiving yards.

3 comments on “Raiders To Place TE Darren Waller On IR”